This tutorial is intended to take you through the process of creating fairly realistic, windy weather in ActiveWorlds 4.1.

As you can see from the screenshot above, it uses vastly oversized particle fountains which whip around you in three dimensions, to do this.

The wind thustly does not ruffle leaves, or bend and sway trees as wind should, but, it can create clouds of fog, mist or dust billowing across a scene in front of, behind and around you, in a fashion that at least makes you feel like the wind is blowing.

We begin by choosing a model, any model, exactly the same as building a normal object. It does not matter what the object is, as we will not be keeping it. We just require the XYZ spatial co-ordinates of the model to place our fountain emitter. Take care placing this just right, as this is the last time placement will be so easy.

When you are satisfied, right-click it to edit it again, only this time, you are turning it into a particle fountain, so as shown in figure 1, click on the 'type' dropdown above the object name, to be presented with a list of options. In this case, you chose Particle Emitter. At this point, the whole build menu box morphs into a new particle fountain menu box, with two screens full of options. 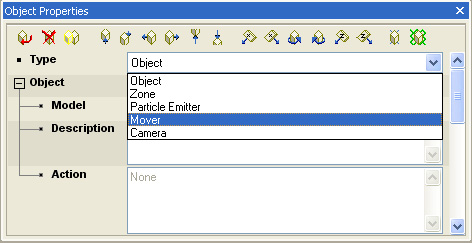 The Build menu with Type option

You cannot edit a particle fountain unless you are already in build mode.

As we are creating wind, we will need to place the nozzle upwind, as it will be the source point the wind blows from. Ideally it should be parked out of easy sight, say behind a tree or boulder, Don't park it IN a tree or boulder, as we still need to edit it, to tell it what to do. If you like, you can do that later.

For now, right-click on the particle fountain again if you left build mode, and let's start to set the options for wind.

The first thing to do is to decide what type of fountain we would like. To do this, click on the drop down list labelled "Particle type". Here you will have a menu with four different types of particles:

Sprite fountains use raw textures to create the effects. After choosing this, you fill the fountain's asset list with jpeg, gif or png filenames to use to create your particle effects.

This fountain literally uses facers - texture files set so they always face towards you as you move. This enables seeming volumetric effects with few particles, that always appear to be facing the user - no matter how many users there are.

Based on facers, a flat panel is just that. The fountain produces a flat stream of particles that face the way the builder was facing when they made the fountain. Walking round it, it does not turn to face the user, but remains facing one direction only.

Model fountains are just that, each 'particle' is a full-sized rwx model, of any complexity. As with any other type of fountain, these can output dozens of models a second, so use with care, as these can crash many systems if overused.

As a side note, model fountains always function with the model particles being non-solid.

For wind, we will be choosing facer. This is so the particles of water/dust the wind picks up appear to be volumetric, but only use minimum processing power - since we will be using a lot of them, we don't want the scene to slow down, nor would it be good for the wind to look unrealistic at diffewre4nt angles.

If you clicked off of the particle fountain here, you would find nothing had happened, for we have not told the fountain what to spew only how to spew it. To tell it what to spew, we use the asset list.

The Asset List, below the Particle Type menu, is a text field, into which a series of filenames are entered, separated by commas. These become the items the fountain spews. If more than one is entered, the fountain randomly decides which one to release, so a range of effects is created. All particles will follow the same instructions, so if you desire two different effects, you will have to create two different fountains on top of one another.

We will be using corona textures here, and modifying them later in the fountain controls. This is because corona textures are designed to be added to light sources, and so are partially see-through at all times, and fade to completely 100% transparent befrore the edge of the texture. This is essential, if we are going to create realistic clumps.

This is the length of time in milliseconds the emitter keeps functioning. Setting it to 0 means it will keep on going forever. We will set our wind to 0 for now - it can be changed later if desired, but a constantly spewing fountain is very helpful whilst tweaking it.

This controls the number of particles released at one go. For an inital breeze, one is more than sufficient.

For a basic wind, we'll use 100 in both boxes, this means we will release a new particle every tenth of a second. Change this up or down to incerease or decrease the density - fog is higher, a light breeze is much lower.

The length of time in milliseconds a particle exists for, after being released, before it destroys itself. Our particles will live for ten full seconds, so a setting of 10000 goes in - note, 10,000 not 1,000.

Particles do not have to be visible when produced. This setting allows you to fade them in slowly over a period of milliseconds after release. We'll set a setting of about 100, so no-one really sees where the wind starts - cannot definitely say "it starts here".

The counterpart of fade in, fade out allows particles to smoothly diminish and fade away rather than just abruptly end. Time is in milliseconds. Again, as with fade in, we'll set it so noone sees where the wind ends. RThis time we'll set it longer, so the clouds of water/dust slowly dissipate, and it feels like the wind continues.

A setting of 300 should be enough.

This is the colour the particle starts out as. If you're using mist or fog, white is the best colour. For smoke, dark grey or black, and for dirt, brown.

White is usually the best colour to start with, and change the end colour if the wind blows over a stream, or muddy ground, to show it picking up particles from that.

A colour for the particle to be at the end of the effect. The textures are tinted towards this colour by a colour mask.

Note: If both colour start and colour end are used, the particles will slowly blend from one to the other, cycling through other colours if necessary.

The X axis for any particle fountain, runs East-West across the world.

These directions are vital to bear in mind when playing with the remaining settings.

All the X Y and Z options have two boxes. One is minimum, the other maximum. The fountain will produce random results between these two extremes.

The size option controls how big the particle is initially created. Size is in metres, so 1.00 is 1 metre, 0.01 is one centimetre.

This will create large 'clouds' that move across at ground level, and vary in size. This variance across all three dimensions is important to make it feel slightly chaotic, and thus natural.

Volume has nothing to do with the size of the particles, this setting is the volume of the emitter. For example with an emitter whose range is between 0 and 1, particles can pop out of it at the centre of the emitter, or up to one metre to the side. To get both sides, you would ask for -1 1 in the two boxes - negative numbers flowing one way, positive the other.

Here, we are assuming a northerly, cold wind, and have designed the bounding box to suit. Change these settings to fit your preferred direction.

this creates a space which is 10 metres high, ten metres east-west, and 35 metres long. Particles will appear randomly anywhere in this space, meaning as the wind blows it may suddenly pick up more material, there is simply no way to predict it.

These ranges give the particles the ability to speed up (or slow down) across a specified range between the max and min values entered. Acceleration governs the swiftness the particles change from one speed to another, not their actual speed. That comes next.

We desire a northerluy wind, so this is how the settings look:

Thus the particles accelerate at one metre per second, per second, heading north, they gain speed over open ground.(To head south, Z would be -1.00|-1.00)

Put simply, the speed values are a fixed speed the particles start moving with, along any of the axis, or combination thereof.

In other words, this is a gentle breeze, not a raging blast. It travels anywhere between nothing and twenty centimetres per second, building up speed on open ground - like a real wind.

Angles are in degrees, not radians. The start angle the particle appears at when it first leaves the emitter. Note: If you have a long fade in time, the particles will not appear until they have been around a while, and may be at different angles when they appear.

Y and Z start angles for a northerly wind are both 0, X set at 90.00 will blow it direct, horizontally north. Adjust for terrain as your world needs.

If we look back at the screenshot from FaerieD now, see how the particle clouds appear faded, like they are not really there, like wispy mist or smoke? That's because they are indeed, only partially there.

The Opacity scale slides between 0 and 100. Fully opaque or 100% means solid. No opaque, or 0% means totally transparent or invisible. This sliding scale allows you to see through your particle streams, to varying degrees. In the screen above, the wind particles are blowing past at 37% opacity, creating a creepy fog look as the wind howls round the castle. increasing the opacity means a more dense fog, decreasing it means a lighter mist.

Creating wind over a large area

If you look closely at the above, you will notice the wind only blows across an area ten metres wide, even though it does blow for a very long distance. If you desire a wider stretch of wind, it is recommended that you use two or more fountains next to one another to achieve this effect, rather than just making the fountain wider. The diagram below explains why.

Diagram 1A: A single wind fountain

The problem with one single fountain covering a large area, as in diagram 1A, is that the particles appear randomly anywhere inside the fountain. So, you could have them all spread out nicely as in the first panel, or they could huddle in one corner, or all group along one edge, or leave a huge becalmed gap in the middle; as demonstrated by panels two and three.

It is not acceptable to have wind all huddled together along one edge of a field, but this is exactly what could easily happen with a single fountain.

If we use multiple fountains, as in diagram 1B, as you can see, whilst each fountain may huddle it's particles in exactly the same manner, the one next to it, for the same chaotic reason, is very unlikely to be huddling in the exact same way.

Therefore you get a good distribution of wind particles across an area, regardless of what any one particular fountain is doing.